How much Naples trivia do you know? We’ve put together a few trivia questions so you can have some fun testing your knowledge. 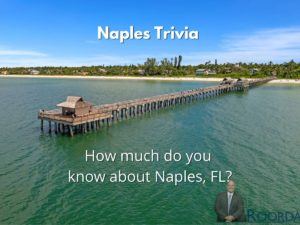 Who formed the city of Naples?

A senator from Louisville, John Williams, and the owner of the Louisville Courier Journal newspaper, Walter Haldeman, sailed down the coast looking for a place to establish a city.

When they saw the beautiful beach as well as the bay, they knew they found it. They founded the Naples Town Improvement Company to purchase the land in 1885.

How much did it cost to buy the land?

What was the first structure (excluding homes)?

A pier. The founders built their homes and a pier, then a 16-room hotel in the heart of the city.

Who was the first guest at the hotel?

The first hotel opened in 1889 and the first guest was President Cleveland’s sister, Rose Cleveland.

What year was Collier County founded?

Who is Collier County named after?

Memphis-born millionaire Barron Gift Collier. He was key to the county’s early economic growth by bringing paved roads and electric power, businesses, and homeowners to the area.

What is the oldest house standing in Naples today?

The oldest house is the Naples Historical Society’s Palm Cottage, which was built in 1895. The house is on the National Register of Historic Places and is open for guided tours. The cottage is located at 163 12th Avenue South, Naples, FL 34102. It’s now a museum and the site of many educational programs.

How big is Naples? Collier County?

How well did you do answering these Naples trivia questions?